-This is the second of a collaborative series: written by John Cribbs & Chase McWhorter at Cedar+Mac

The Emergence of a Problem in the AEC Industry: Revisiting the Ongoing Analogy of Sailing

Many people think of sailing across the Atlantic Ocean as a luxury vacation on a Cruise Liner (ie. Royal Caribbean Cruise Lines, Norwegian Cruise Lines and the like). Cruise liners offer 7 course meals, rock climbing walls, casino floors and expansive Vegas style theaters as basic amenities within ship walls… not to mention the 3,000+ cabins which house over 6,000 passengers.

Let’s quickly reminisce on how we’ve succeeded in creating this form of Transatlantic Cruising. Simply stated, modern cruise liners are technological descendants of the basic canoe and oar. As populations grew and goods needed to be transported with more reliability and speed, the size of the canoe grew into a larger ship which contained multiple banks of oars on each side. As the speed of these ships was dictated purely on water currents and man power, the advent of the sail was adopted in tandem with the oar so as to borrow from the power of the wind, while still allowing for mechanical maneuverability during docking and times of minimal gusts. Each ship from that point on was tailored in size and width and matched with the correct number of sails for a specific use and type of journey.

Along comes the marine steam engine. Total game changer… That technology was adopted and used on ships for efficiency and has been evolving ever since. Now we are all caught up to the modern-day Cruise Liner. 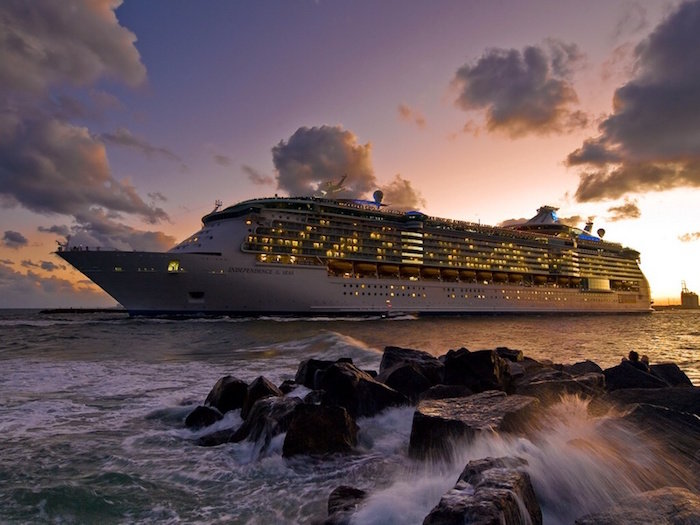 Relationship to the AEC Industry:

The Architecture/Engineering/Construction (A/E/C) industry is one that stands out as an intimately unique industry and one that contains a seemingly disparate set of professions. Why is this the case? As identified by Teicholz (2004) the construction industry has seen an overall decline in productivity over the last 50+ years (Figure 1). This leads me to believe that we are at a tipping point in the  industry wherein technology must begin playing it’s part within the AEC fields just as much as all other non-farm industries. We have seen this slowly begin to happen over the last 20 years with the advent of Building Information Modeling (BIM) and related technological solutions (think engine). The interesting thing in my view is how slowly BIM has been adopted and integrated into the standard AEC workflow, yet how quickly project teams are to throw a technological solution at a fundamental project issue (think engine on a canoe without an oar or rudder). 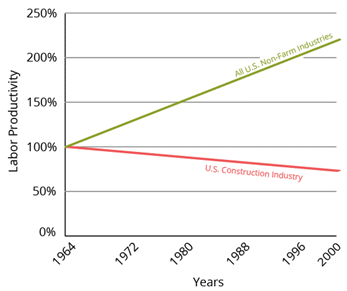 In this scenario, the fundamental problem identified was that you can only go so fast with an oar. An engine is exponentially faster. The knee jerk reaction then is to throw an engine on the back of a canoe in place of the oar. … but without the oar acting as a rudder you can’t steer the canoe. Now you’ve created an entirely new problem by not fully understanding the implications of using an engine. Sure you can get to your destination faster (in theory) by using an engine, but if you can’t steer then your plan is mediocre at best and the reliability of your arrival time is greatly reduced (inaccurate at best). Does this sound familiar to those of you engaged with Building Information Modeling and construction technology?

BIM is not AutoCAD. It is not simply about increasing downstream productivity for documentation purposes. It is not a simple technology which intends to replace a drafting board. It is a technological approach to vertically integrating the AEC disciplines and it crosses all boundaries of a given delivery method. It is about capturing accurate project information and data at the most appropriate time within a project lifecycle. BIM is not a single software platform. It is the process with which a digital representation of a facility and the subsequent data is produced and depicted. With BIM comes necessary project pre-planning… truly understanding the implications of the technological solution you are interjecting into the project. Knowing who, when and how information is to be transferred into the model for use downstream is the key to vertically integrating a model into a multi-disciplinary project delivery process. You cannot simply “use” Revit (or any other model authoring tool) and say you “do” BIM. You cannot simply put BIM on top of existing and traditional workflows and expect improvements in your project delivery. You must rethink the process to accept the good and the bad from BIM and plan your success.

Don’t simply add a motor to a canoe and forget how to steer… This simply exacerbates the speed at which you reach your destination by diminishing your ability to maneuver along a planned route.

Don’t simply add BIM to your existing process and expect productivity improvements… for every action there is an equal and opposite reaction and the odds are not in your favor when improperly interjecting technology.

Stay tuned for the next entry!